Grand Rapids, Michigan, May 2, 2016 – Crystal Flash, one of the largest independent energy distributors in Michigan, announced today that it has established an employee stock ownership plan, or ESOP, to ensure the long-term future of the company.

The Michigan-based energy distributor’s 250 employees will become beneficial owners through the ESOP beginning in 2016. Crystal Flash, which has 14 locations across the state, shared the news with its employees during calls and meetings last week.

The move comes as Fehsenfeld family members decided to transition their interest in the company after more than 80 years and three generations of leadership. Establishing an ESOP is part of the company’s evolution that has included the hiring of President Tom Olive in 2015, when Chairman Tom Fehsenfeld retired from executive leadership. The process also included strengthening the company’s board by adding three outside directors.

“We see this ESOP as a natural progression for our company, which already has a strong culture of ownership,” Olive said. “As we begin this transition, we thank the Fehsenfeld family for its generations of strong leadership that have made this company an exceptional place to work.

“It’s a testament to the family for its generosity and wisdom in creating this ESOP. The Fehsenfelds want to ensure that team members who have contributed to building Crystal Flash can now build a secure financial future for themselves and their families as a direct result of their efforts to grow the business.

“As always, our goal is to provide customers with reliable and high-quality service. We believe an ESOP puts us in the best position to continue that commitment to our valued customers.”

ESOPs are a popular method of business ownership transition.  ESOPs are qualified retirement plans that invest primarily in the stock of the sponsoring employer.  Once employees are eligible, they annually receive shares of stock that can be “cashed out” upon retirement.

“Research has shown that employee-owned companies perform above industry averages,” Olive said. “Knowing our team members, that will be an easy standard for them to continue.”

John E. Fehsenfeld founded Crystal Flash in Indianapolis in 1932 with one truck and a rented fuel storage facility. His son, Frank, moved operations to Grand Rapids soon afterwards. The business moved from gas stations to the home heating business in the 1940s.

Crystal Flash entered the propane business in the 1980s and expanded into commercial fleet fueling. The company exited the gasoline retail business in 2002 and focused on energy distribution; it subsequently purchased eight fuel companies as part of a planned growth strategy.

Crystal Flash now has 14 locations across Michigan and delivers propane, diesel and other fuels to power home, fleet, farm or business.

Crystal Flash™ is an employee-owned energy distribution company focused on commercial and residential customers throughout the Lower Peninsula of Michigan.  Established in 1932, Crystal Flash has grown as the demand for energy has evolved, and today concentrates on the sale and distribution of propane, diesel and other fuels.  Today, the company is one of the largest independently owned energy suppliers in the state with more than 250 employees in 14 locations. 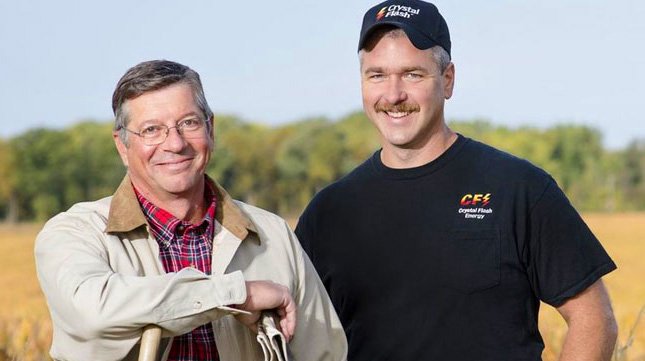